It is possible to determine the distribution in number and size of the particles constituting the aerosols. These particles, whose diameter is between 10-3 et 100 micrometers, are particularly concentrated over the industrialized regions of the Northern Hemisphere.

The Angström formalism allows to characterize the aerosols by means of two coefficients: the wavelength exponent ('alpha') and the turbidity coefficient of Angström ('beta').

The wavelength exponent is an index sensitive to the aerosol size distribution. It is inversely related to the average particle size of the aerosols: the smaller the particles, the higher the exponent.

For example, for the year 2007, there were variations from 0.2 in January to about 1.0 in August in the middle of the Atlantic (in the Azores), while it varied from 0.75 in January To about 1.5 in July over Paris (in beaches similar to those measured in the middle of the Amazonian equatorial forest). It is much more stable in the middle of the Pacific in the equatorial zone: for example, in Nauru, the variations of this coefficient vary from 0.3 to 0.65 on average, with peaks not exceeding 0.8 during periods of stronger activity cyclonic. Major events such as the huge bush and forest fires and volcanic eruptions increase the coefficient observed over periods longer than the usual seasonal peaks. In the south of the Algerian plateau, at Tamanrasset at 1400 meters altitude, it is even lower and varies even less, around 0.1 and 0.35 (with its peak in the middle of winter). 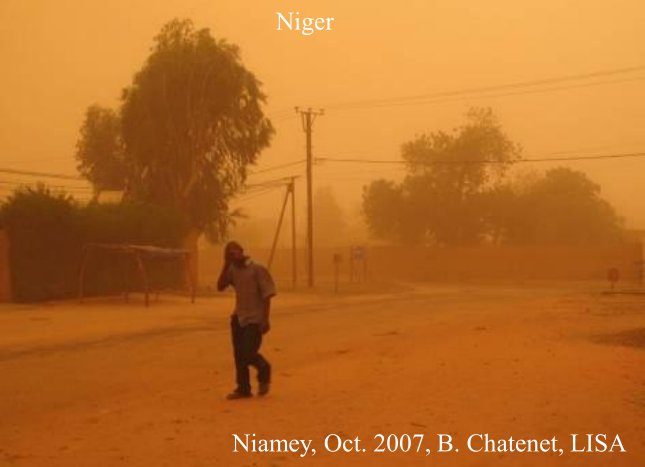 Aerosols also have complex effects on albedo (*), and longer-term climate change, their influence is still difficult to take into account due to the multiplicity of sources, the complexity of their transport in the High atmosphere and many other partially correlated factors.

Global measurement campaigns should be used to establish these correlations and better understand and anticipate climate change, but still suffer from insufficient data (outside North America and Western Europe where sensor networks are well developed).

(*) Albedo: relation between the incident energy and the energy reflected by a surface.

The turbidity coefficient of Angström is characteristic of the amount of these particles in the atmosphere.

To calculate these coefficients, measurements of the optical thickness must be made by evaluating the intensity of the sunlight, targeting the sun with a photometer. We also need to perform these measurements in at least two different wavelengths.

We will call `tau_a`, the measurement of the optical thickness realized in a known wavelength.

where `beta` is the Angström turbidity coefficient, 'lambda` the wavelength (in micrometers) and α, the Angstrom wavelength exponent.

Attention, `beta` and α are independent of the wavelength.

`Lambda` is expressed in micrometers.`beta` values less than 0.1 correspond to a relatively clear atmosphere and values greater than 0.2 are associated with a disturbed atmosphere.